‘How can one who does not know Greek imitate the Greek authors, who are the most advanced in every field of learning and from whom, as is known, everything that is worthy of praise has passed into the Latin tongue?’ 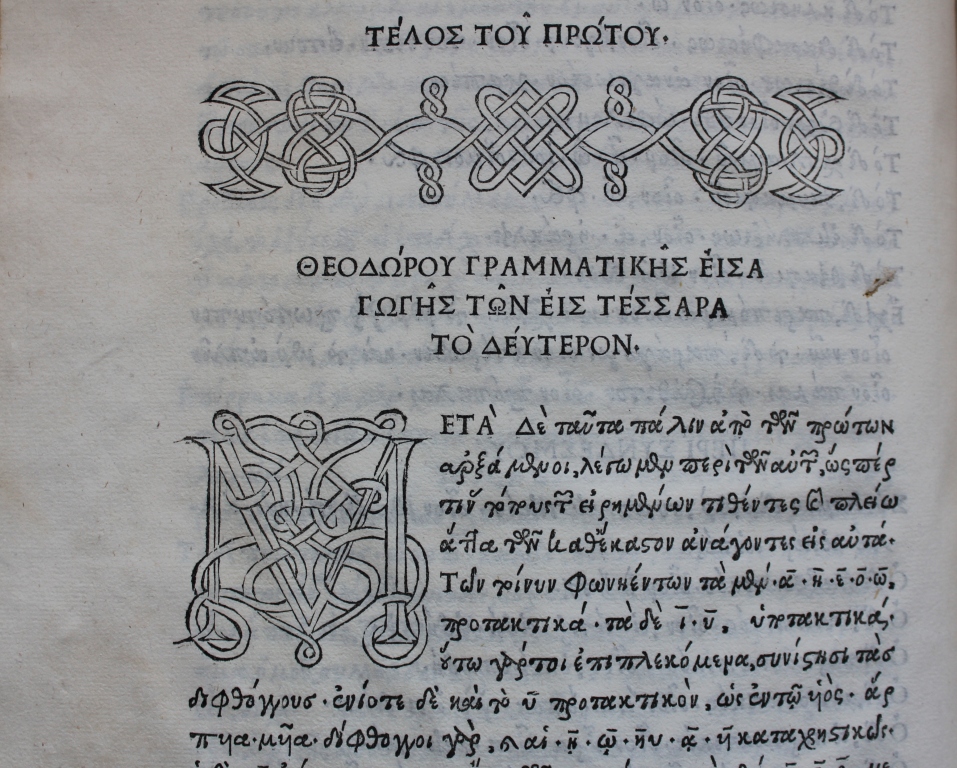 In a letter dated 28 October 1485 Aldus wrote to Angelo Poliziano to comment on one of Poliziano’s Greek letters which he and Emmanuel Atramyttenos, a Cretan scholar, had read at Mirandola.2 Aldus had met Atramyttenos in the mid 1470s at Ferrara and through Atramyttenos he was thereby connected in a scholarly lineage to Michael Apostolis (Atramyttenos’ teacher) and, through him, to Argyropoulos, who had taught Apostolis at Constantinople before its fall in 1453. As Fletcher (1997) notes, at Ferrara, Aldus had been taught Greek by Battista Guarino (1434-1513) whose father had been a pupil of the famous Greek scholar Demetrius Chrysoloras.

Theodore Gaza had taught Greek at Ferrara in the 1440s, a few decades before Aldus’ arrival there. As Botley (2010) notes, ‘during the fifteenth century, Greek grammar meant the works of Chrysolaras, Gaza, or Lascaris.’ Botley argues that Gaza’s Greek grammar was a product of the early 1460s but it quickly became a staple for anyone interested in learning Greek. Divided into four books, it greatly simplified learning Greek by reducing the number of verb conjugations down to five (previously thirteen). Leading Greek scholars used it to teach their students: for example, both Markos Mourousos and Scipione Forteguerri, two scholars closely associated with the Aldine press, had learnt Greek using Gaza’s grammar. Aldus decision to produce a print edition was therefore unsurprising. His 1495 grammar of Gaza was a publication which was met with acclaim by all, not least because it contained not only Gaza’s grammar but also texts by Apollonius Dyscolus and Herodian’s De numeris (Worth’s copy contains Gaza’s grammar alone).

Its adoption by leading educators such as Girolamo Aleandro (1480-1542) at Paris and Erasmus during his sojourn at Cambridge ensured that Gaza’s grammar would become one of the leading teaching aids in early sixteenth-century Europe. But not all were using the Aldine edition which, beautifully produced as it was, was a costly item. Most teachers preferred to use far cheaper copies of the first book as the quintessential introduction to learning Greek in Europe. They, like Aldus himself, were aware that the further a student progressed with Gaza, the more difficult the intellectual terrain became. Aldus mentions in his letter to Catherina Pia a number of teaching aids which he used when teaching Greek to her sons, the princes Alberto and Leonello Pio: the De accentibus et latinis et graecis opusculum, the Libellus graecus tamquam isagogicus and later, he mentions his Institutione graecae which he had compiled in the 1480s.3 When his own Greek grammar was posthumously published by the Aldine press it reflected the influence of Gaza’s grammar. 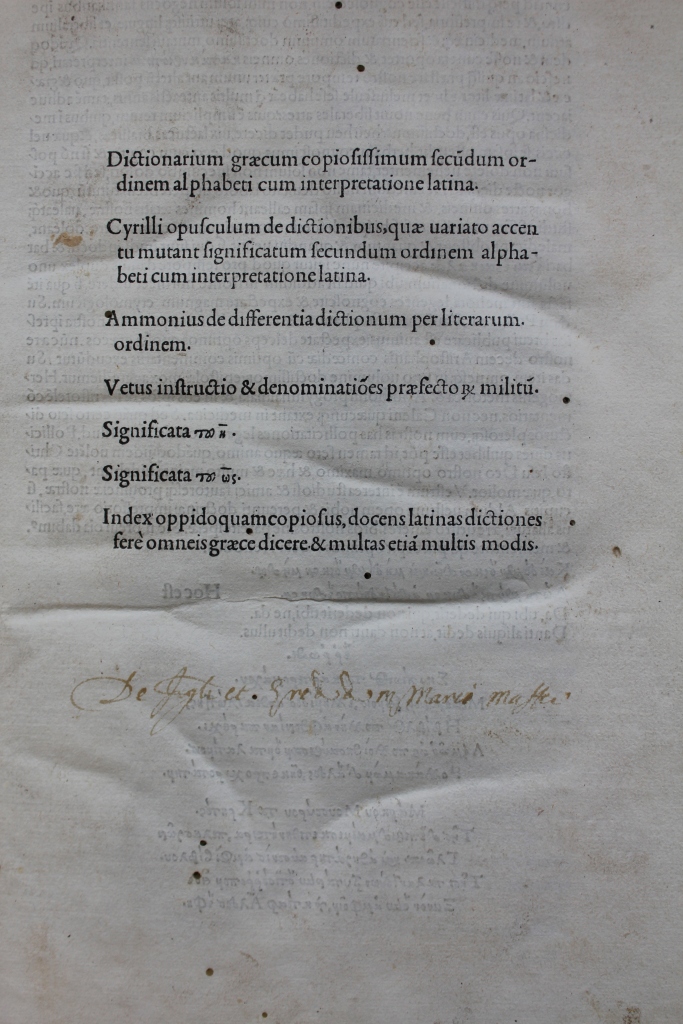 Hand in hand with Greek grammars were Greek Lexica. Worth owned a 1514 copy of the Aldine Suda lexicon and images from his 1502 editio princeps of Pollux may be seen on the Collecting Aldines webpage of this website. The Suda lexicon had been popular in manuscript form and was first printed by Demetrius Chalcondyles in 1499. It was this Milanese version which formed the basis for the later Aldine edition. Worth’s copy of Pollux’s Onomasticon is bound with the editio princeps of Stephanus of Byzantium’s text about cities. Aldus, in his preface for the latter, a dedicatory letter to Giovanni Taberio (a teacher of Greek in Brescia), notes especially that he was producing such Greek teaching aids as a response to market demand: ‘since you teach Greek and Latin publicly there to a very large audience and to great acclaim, and wrote to me recently asking me to send you certain Greek books because your pupils needed them…’4

Worth’s earliest Aldine lexicon was one of the first to be produced by Aldus: Giovani Craston’s Dictionarium Graecum (Venice, 1497). As Botley (2010) notes, Crastoni’s Lexicon was the first Greek-Latin lexicon to be printed and it continued, despite some deficiencies, to provide a model for future lexica. The Aldine edition of 1497 combined Crastoni’s Latin-Greek dictionary and the larger Greek-Latin dictionary, to form, in his own words, ‘a double dictionary in a single volume’.5 In addition to these, Aldus also included short works by pseudo-Cyril and Ammonius, thus giving the reader added value.