‘Whoever you are, Aldus begs you once and for all to state briefly what you want, and then leave quickly, unless you have come, like Hercules, to support the weary Atlas on your shoulders, for that is what you will do when you enter this workshop.’ 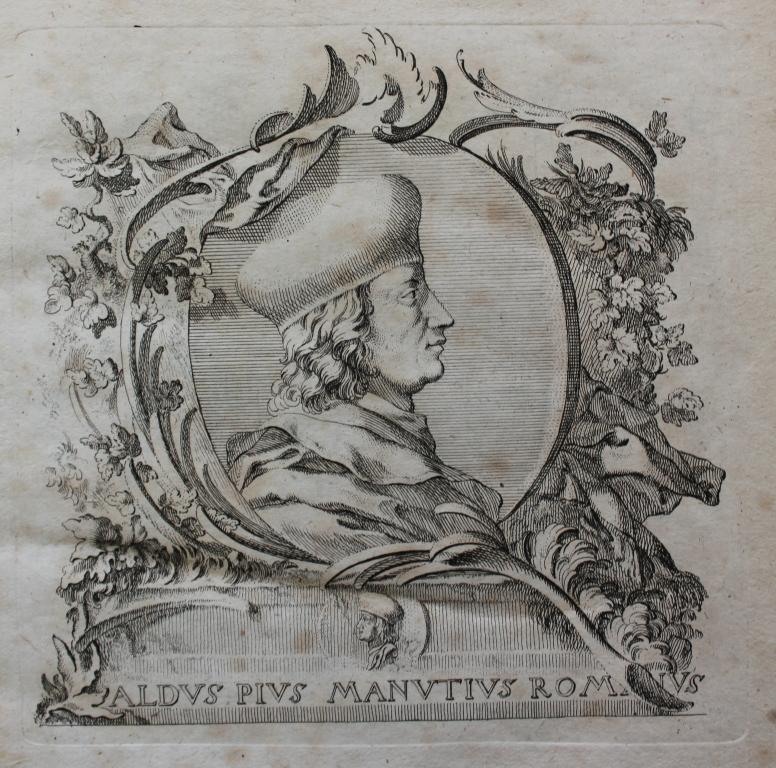 Aldus Manutius, writing to Andrea Navagero (1483-1529) in the preface to his edition of Cicero’s Rhetorica ad Herennium, was both playfully and ruefully commenting on the success of his printing business, a business which he had developed over a twenty-year period to become one of the iconic printing houses of early sixteenth-century Europe.2 From his explorations in the printing of Greek works in the mid 1490s to his innovations in both font and format in the first decade of the sixteenth century, the Aldine press under Aldus was a constantly changing enterprise, revolving around one man but dependent on a whole host of interwoven parts: the financial backing from his patrons and business partners; the material help of his printing assistants; and, last but not least, the editorial assistance of a widespread scholarly friendship network – the Aldine Republic of Letters.

Erasmus, in his colloquy Opulentia Sordida (The Wealthy Miser), provides a graphic pen-picture of life at the Aldine press in 1508-1509. But Erasmus does not tell the whole story, for what was emblematic of the Aldine press was not the miserly quality of Andrea Torrisani but the generosity of Aldus and his scholarly friendship network. Aldus was heavily dependant on his network not only for practical financial assistance but also, crucially, for access to original texts. True he was well-placed in Venice with access to a number of important private libraries but it is clear that scholars across Europe sent him manuscripts of original texts which they hoped he might print.3 First and foremost among his text providers was Markos Mousouros (c.1470-1517) whose own library provided many of the source texts for the Greek editions.4 Mousouros had also been responsible for classifying the Greek codices of Giorgio Valla (1447-1500), which had been purchased by Alberto Pio (1475-1531) – another important source of textual material.

Aldus’ output was staggering, both in the quality and quantity of the endeavour. In the preface to his 1503 edition of Euripides, he stated that the press was printing ‘a thousand or more copies of some fine author every month.’5 But as his catalogue of 1513 shows, a thousand copies might be printed but not of them could be sold.6 This was particularly the case with the Greek editions where the potential market, though dedicated, was much smaller than that for the Latin editions. The catalogue of 1513 demonstrates that many of the earliest Greek editions of the 1490s were still available at knock-down prices.

As Lowry (1979) points out, the output from the Aldine press has sometimes obscured the very real financial vicissitudes the press faced. Though Aldus had the support of Andrea Torricelli and Pierfrancesco Barbarigo, with occasional support for specific projects coming from Alberto Pio, the press was not immune to either the demands of the marketplace or the realities of early sixteenth-century Italy. Some it benefited from – the demise of other printing houses left more of the market open to the Aldine press – but others, such as the economic crisis of 1499, proved extremely detrimental to trade generally. As Lowry points out, following the high point of 1502-3, ‘there were more than four years of total inactivity, between December 1505 and December 1507, April 1509 and October 1512.’7 The explanation for the silence of the press during the latter period is clear – the League of Cambrai, when a host of forces were ranged against Venice, necessitated flight, but it is not entirely clear why the Aldine press was dormant in the years 1506 and 1507. Perhaps, as Lowry suggests, Aldus may possibly have felt the need to take stock of his project – and, at the same time, fight off the increasing competition from other printers.

Staikos, Konstantinos SP. (1998), Charta of Greek Printing. The Contribution of Greek Editors, Printers and Publishers to the Renaissance in Italy and the West (Cologne).

2 Worth did not collect Aldine editions of Cicero.

4 Staikos, Konstantinos SP. (1998), Charta of Greek Printing. The Contribution of Greek Editors, Printers and Publishers to the Renaissance in Italy and the West (Cologne), p. 317.

6 This catalogue is not in the Worth Library.